The Colorado Symphony is cultivating new generations of music lovers through big name collaborations that are reshaping the state’s musical landscape. 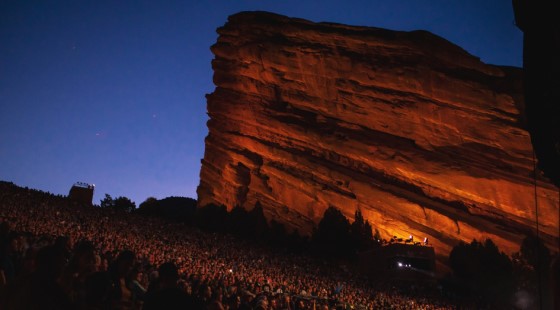 When you think of symphonic music, what do you see? What do you hear? Does your mind wander to faded images of legendary composers seen in school textbooks and classrooms? Do you hear a favorite symphony or concerto, perhaps something you associate with a powerful memory or emotion? Or are you instantly transported into your favorite music venue, immersed in the sights and sounds of the concert going experience?

From the 18th century through the early part of the 20th, symphonic music was the predominant musical art form for much of the world, and the concert hall was the world’s conduit. Lacking the modern technology we enjoy today, someone from this period would be lucky to hear a piece more than once in their life. Imagine hearing Beethoven’s Ninth Symphony for the first time and never having the opportunity to hear it again? This scarcity generated a voracious appetite for symphonic music, propelling patrons to the concert hall in droves for generations.

After the turn of the 20th century, new forms of music began to gain in popularity, including jazz and rock and roll, and later country, hip hop, and electronica. Simultaneously, music also became dramatically more accessible to people everywhere — from homes to personal vehicles, and later, the ability to access any song with the push of a button. This increased volume and accessibility has created more competition than ever for the eyes and ears of music lovers everywhere.

So what is the significance of symphonic music in the 21st century, what role will it play moving forward, and how can classical symphonic music stay relevant with the challenges presented by modern society?

This is the question around which every orchestra in the world grapples, and it’s one that the Colorado Symphony is at the forefront of addressing.

The answer begins with reaching larger and more diverse audiences than ever before. 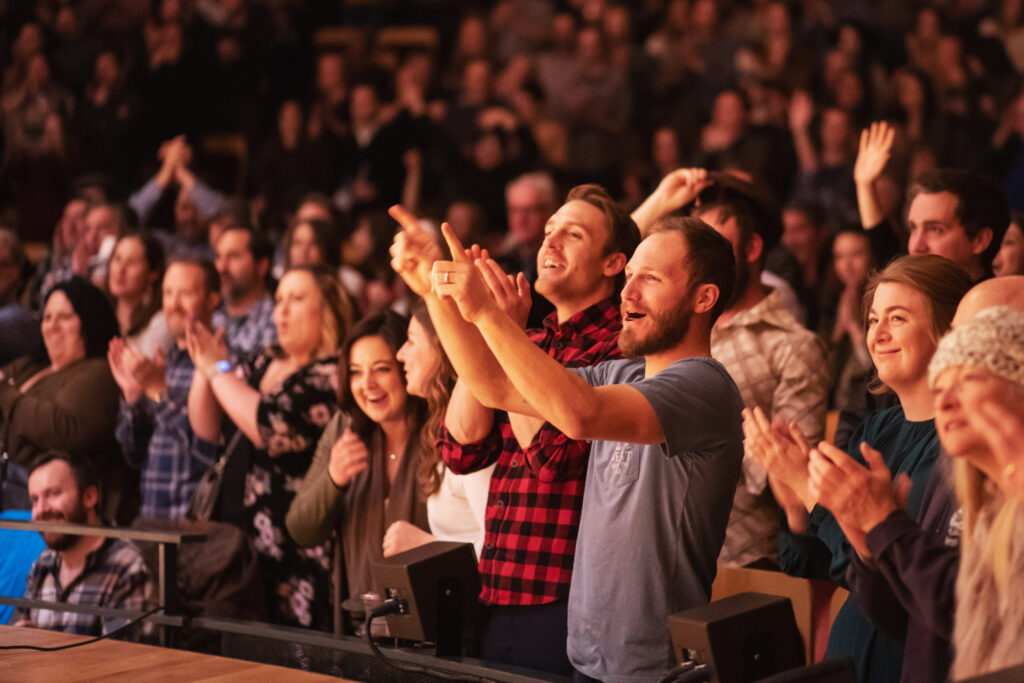 One way to accomplish this is by collaborating with musicians outside of the normal sphere of classical music. One of the first notable instances of such a collaboration involving the Colorado Symphony occurred in 1992 with a performance alongside The Moody Blues at Red Rocks Park & Amphitheatre. However, such partnerships did not manifest regularly until nearly two decades later when, in 2012, the Colorado Symphony joined GRAMMY®-nominated Indie folk-rock group DeVotchKa for a pair of performances at Boettcher Concert Hall and Red Rocks.

For the Colorado Symphony, this collaboration was an incredible opportunity to perform with a group of local, world-class musicians while also coming face-to-face with thousands of music lovers who may never have seen a live symphonic orchestra before. And for DeVotchKa, collaborating with the Colorado Symphony added lush new layers to their songs, creating a concert experience that felt familiar and yet completely original.

After the Red Rocks performance Westword wrote, “Last night, the rare and remarkable collaboration played for a larger audience at Red Rocks Amphitheatre — and the unexpected, yet perfectly natural musical chemistry between the two groups proved transcendent once again.”

“One of the great things is that we were hoping some of the people who may not normally come down to see the (Colorado) Symphony, if we were involved they would take a chance and come down to see it and keep coming back when they realized what a treasure we have,” noted Nick Urata, lead vocalist for DeVotchKa.

“When you have the orchestra, it’s so lush and everything sounds the way I thought the band should always sound.”

Another memorable collaboration came a few years later in 2016 when the Colorado Symphony and Chorus performed with The Flaming Lips — the colorful, boundary-pushing rockers from Oklahoma City — at Red Rocks, invigorating the band’s seminal album, The Soft Bulletin, in front of a sold-out crowd. The performance was recorded and released as an album in October 2019, following a second sold-out performance of The Soft Bulletin at Boettcher Concert Hall in February of that year.

“I had no idea about all the stuff going on behind me,” Resident Conductor Christopher Dragon told the Denver Post after the Boettcher Concert Hall performance. “It was funny seeing Instagram posts later and realizing (vocalist Wayne Coyne) was twirling a light around his head and throwing confetti. And nobody told me about the giant, pink inflatable robot. I have never heard an audience so loud in Boettcher. I felt like I needed earplugs just for the cheering.”

A symphonic orchestra performing with rock artists? Perhaps these collaborations seemed odd or out of place to some. But any trepidation soon melted away when met with the enthusiasm and joy these concerts engendered from each audience.

“What we do at Red Rocks is we’re giving many audience members their initial exposure to what live symphonic music can be,” said Anthony Pierce, Chief Artistic Officer for the Colorado Symphony. “It’s a long process to get anybody to be your fan and it doesn’t happen overnight. We have to chip away at that gradually and it starts with education and outreach in our community. We have the largest and most diverse audience in our history and the numbers prove that. But our greatest challenge as an institution is ensuring there is demand for live symphonic traditional classical music in the future, and that’s what we’re committed to.”

In recent years, the Colorado Symphony has become a staple at Red Rocks during the summer, including performances alongside some of music’s biggest names — OneRepublic, Wu-Tang Clan, Weird Al Yankovic, and actor Jack Black’s comedy rock duo, Tenacious D. These types of performances — the outside-the-classical-music-box-type shows — are not only delivering vital revenue for this nonprofit orchestra, but also solidifying that future audience which is vital to the future of symphonic music in Colorado.

“We’ve been working to consciously build a reputation as an orchestra where a non-symphonic artist has their great first experience with an orchestra,” Dragon told the Denver Post. “We can still do traditional programming while we bring in artists, even Colorado artists, like Gregory Alan Isakov and Elephant Revival. When you find the right formula and connection, it just creates something uniquely beautiful. You can’t recreate that experience anywhere else.”

The artists themselves have been equally moved by these collaborations, with many recognizing the orchestra to thunderous applause from stage.

“Just watching a symphony play, and having them play these songs was amazing. I never thought I’d feel anything like that,” said Gregory Alan Isakov.

“I heard the symphony play this song last night, and it really killed me. So hang on to your handkerchiefs,” said John Prine during his September 2019 performance with the Colorado Symphony. Sadly, the performance would be one of the last for the legendary singer-songwriter, as he passed away in April 2020.

“I think in Colorado and across the country, we’ve made ourselves known as the orchestra that’s doing the most innovative and interesting things.”

When considering a collaboration, the Colorado Symphony first assesses what they can bring to the partnership. If adding orchestration doesn’t contribute significantly to the quality of the music, the collaboration isn’t pursued. There are also additional challenges, like creating the proper sound balance so that the orchestra can be heard over the raw power of a rock and roll drum kit or an electric guitar.

“It’s important for us to make sure the orchestra adds value and something impactful to each collaboration, and our mission charges us to ensure there is a future for live symphonic music,” said Pierce. “We’re still committed to curating a classical art form so we’ll never stop playing Beethoven, but we’re committed to the notion that a Symphonic ensemble can do many things well in addition to performing classical music at the highest level.”

In today’s evolving symphonic landscape, orchestral programming requires a delicate balance between core classical masterworks and popular collaborations along with other types of programming like the increasingly popular Movie at the Symphony concerts. Because of this, every performance may not appeal directly to the core Classics audience. In order to stay relevant for generations to come, it has become important to show younger audiences that symphonic music has always been a part of their lives, whether they’re initially aware of it or not.

“That’s the magic question that every orchestra faces,” added Pierce. “How does playing a Harry Potter or Star Wars movie keep classical music relevant? What we do with these collaborations is we’re giving younger generations their first exposure to what live symphonic music can be. Once they’ve seen us 2-3 times at Red Rocks with one of these popular artists or watched us perform the score for one of their favorite movies live, then I think they’re much more likely to come see our traditional programming in Boettcher Concert Hall. We’ve got to be doing all of these things to make sure we have a future audience.”

This multifarious approach to programming hasn’t altered the overall mission of the Colorado Symphony, nor has it reduced the number of Classics performances programmed each season. In fact, the orchestra has taken Classical-only repertoire to outdoor venues like Red Rocks Amphitheatre, Arvada Center, and Dillon Amphitheater in recent years.

“There’s no question we are one of the busiest orchestras in the country right now,” said Pierce. “We haven’t reduced our volume of purely classical content or sacrificed our core mission as curators of symphonic music. We’ve just diversified. We are still committed to our core classical content — that’s our greatest priority — but we have to do things that ensure there is a future audience for symphonic music.”

As the Colorado Symphony looks ahead, there exists a renewed sense of mission to debunk the myth that symphonic music is only for those of a certain age, a certain demographic, or a certain socioeconomic status. In that vein, an exciting new wave of collaboration projects are set to be announced in the coming months. Through collaborations like these and additional outreach in the community, the orchestra is being heard by more people than ever before and the future of symphonic music has never looked brighter.

“What orchestras are doing in their communities is evolving, and I believe we’re ahead of the curve,” said Pierce. “Do we think that every person who came to see Wu-Tang Clan will now come to one of our Classics concerts? I doubt it. But do they now think that the Colorado Symphony is the coolest orchestra out there? I think so. And I think they feel a new sense of ownership to the ensemble. We are creating lasting impressions that will have an impact 10, 20, and 50 years into the future.”

From the best of the past to the edge of tomorrow, your Colorado Symphony is at the forefront of a symphonic revolution, imagining groundbreaking concepts that inspire new generations of music lovers while ensuring a prosperous future for live symphonic music in Colorado.

This article first appeared in the 2022 spring edition of Soundings, the Magazine of the Colorado Symphony.