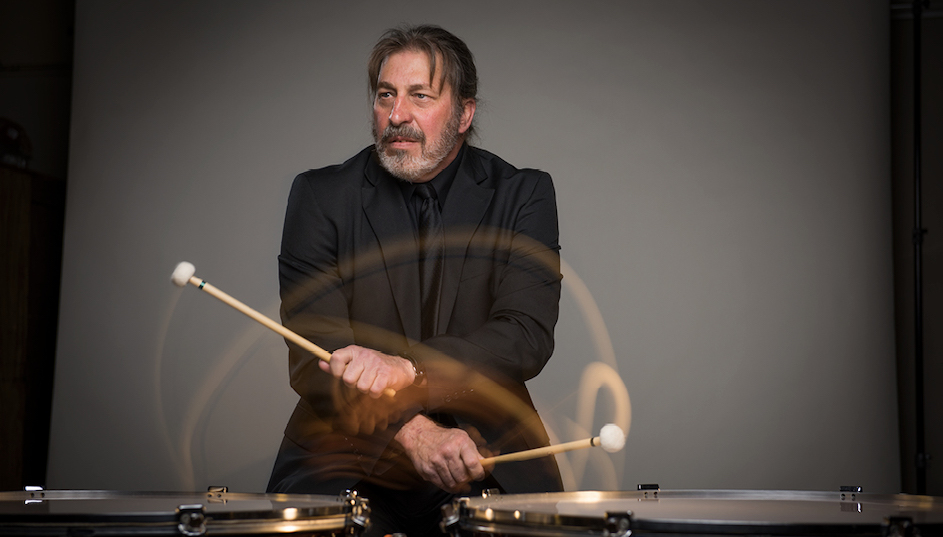 William Hill has been critically acclaimed as a composer, soloist, visual artist, recording artist, and conductor. Currently he is Principal Timpanist with the Colorado Symphony, Music Director of the Evergreen Chamber Orchestra, and teaches composition at Denver University’s Lamont School of Music.

Recent new works include Soundscape for Electronics and Orchestra by Colin and William Hill premiered in 2017 with Mr. Hill conducting the Evergreen Chamber Orchestra, Metamorphosis for solo marimba and orchestra with the composer as soloist and the Lone Tree Symphony in 2016, El Perro Azul for Solo Violin and Orchestra premiered in 2015 with Nadya Hill violin and the Evergreen Chamber Orchestra, and video music for Oh! Heck! Yeah! which Mr. Hill composed, conducted, and recorded with the Colorado Symphony in February 2014. Hill was commissioned by the Colorado Symphony to compose, conduct, and record music for the opening of the rennovated Union Station in July 2014.

Hill’s Symphony #3 premiered in January 2012 with Larry Rachleff conducting the Colorado Symphony. Symphony #3 was also nominated for both the Pulitzer and Grawemeyer Awards. William Hill’s Symphony #2 was performed and recorded for Albany Records in March 2010 by the Lamont Symphony, with Lawrence Golan conducting. The two CD set “Bill Hill and Friends Live Jazz/Latin/Fusion” was released in September of 2011 by Raccoon Hollar Music.

The Grand Rapids Symphony with Music Director David Lockington opened its 2010 Classical Masters Series with William Hill’s tone poem Aurora Borealis. The success of this led to an invitation to be guest composer and curator for the first concert of the Grand Rapids Symphony’s highly successful new MusicNow Series in October 2013. Mr. Hill’s Percussion Concerto, was premiered by the Colorado Symphony Orchestra in May 2006 with Peter Oundjian conducting and the composer as soloist.

The theatric overture A New Direction was commissioned for the Gala Opening of Denver’s Buell Theatre, and Hill was recognized by Governor Romer for his contribution to the event. He has been chosen four times as a winner in the Percussive Arts Society International Composition Contest, and has won prizes and commissions from Meet the Composer, the Colorado Music Teacher’s National Association, the Denver Foundation, and many others. Mr. Hill has performed on several Grammy nominated recordings.

The Moravian Philharmonic of the Czech Republic recorded four of his orchestral compositions for Albany Records, and these 2 CDs were released in the Spring of 2007. Hill’s award winning Jazz/Latin/Fusion group has released 2 CDs and one DVD, and his World Music from Raccoon Hollar released a CD and DVD in 2015.

A multi-instrumentalist, William Hill has been featured with numerous orchestras as a soloist on timpani, marimba, vibraphone, drum set, ethnic percussion, and multiple percussion concertos. He is equally at home in classical, jazz, pop, folk, and world music idioms. Hill’s first solo CD Rhythms of Innocence, featured him on over 75 percussion instruments, recorders, wood flutes, didjeridoo, and piano. His jazz compositions have been featured in live performance on Colorado Public Television, and his compositions are regularly played on NPR stations.

William Hill holds the Bachelor of Music with High Distinction (1977) from Indiana University, and the Master of Music (4.0 GPA) (1980) from the Cleveland Institute of Music. He was inducted into Pi Kappa Lambda National Music Honor Society by unanimous vote in 2017. Hill was awarded the Performer’s Certificate from Indiana University, the Maurice Abravannel Music Director’s Award from the Music Academy of the West, and the Drum Set Soloist’s Award from the Ohio Collegiate Jazz Competition.

William Hill is married to violinist Natalie Schmitz Hill and they have two children, Nadya, born June 17,1988, and Colin, born August 2, 1994, both excellent professional musicians. The Hill’s love to enjoy Colorado’s wonderful outdoors skiing, hiking, swimming, and horseback riding. The family also enjoys art work, and performing concerts for various community and family oriented events. An avid mountaineer, Hill has climbed and skied from the summit of more than 60 of Colorado’s highest peaks.

“It was one of those rare occasions when the ears could bask in almost total enchantment…….if one piece stood just a bit above the rest it was Hill’s Seven Abstract Miniatures.” — The Cleveland Plain Dealer

“Hill’s Sonata for Marimba and Strings (with the composer as marimbist extrordinaire) stole the show. His music is unabashedly accessible and undeniably fun. The staid Nova audience whooped and hollered at the eye popping conclusion.” — The Salt Lake Tribune

“Hill’s pieces are marked by a high level of rhythmic inventiveness, a strong sense of lyricism and a wide range of harmonic languages. Colorful, impressionistic orchestration, sweeping gestures, and the feral sound of James Pellerite’s native flutes beautifully evoke the wild openness of the landscapes touched by the northern lights. The Moravian Philharmonic, led by Lawrence Golan, performs with passion and vigor.” — Stephen Eddins, All Music Guide

“William Hill’s Funky Little Crustceans is as charming as the title suggests…..his colorful writing for percussion (and everyone else) comes as no surprise, but he also has some memorable musical ideas. Aurora Borealis is atmospheric and often aptly luminous, and the sound of the Native American flutes is haunting. The Seven Abstract Miniatures are delightful and far more substantial than their title suggests. The composer himself is the superb percussion soloist and the orchestra sounds terrific throughout.” — David Hurwitz, Classics Today

“This was a very different kind of jazz concert. Every work on the program (composed by William Hill) was extremely sophisticated and reveled in complexities. Chiaraluce, Haverstick, Hanson, Bland, and Nadya and Bill Hill are capable of some of the most difficult improvisations that I have heard in many years. Hill can do with one hand what most other percussionists can do with two. Absolutely amazing, it will bring tears to your eyes.” — Robin McNeil, Opus Colorado

“I was riveted and delighted by the CSO’s performance of William Hill’s new Symphony #3, a thrilling and mature work premiered to huge acclaim. It just doesn’t get any better than this.” — Lorenz Rychner, Editor, Recording, The Magazine for the Recording Musician

“William Hill is a major composer, and his Third Symphony will find its place in the history of music as one of the finest symphonies of its time.” — Robin McNeil, Opus Colorado

“Hill’s Meditation and Ritual Dance takes pride of place because of his imaginative orchestration and the contrasting colors and moods that he evokes. Hill’s Aurora Borealis invokes a haunting and dark atmosphere which must be a sonic equivalent to the visual spectacle that many have witnessed. His works demonstrate a secure technique, and accessible but original style, and an abundance of substantial and contrasting musical ideas. In Seven Abstract Miniatures Hill has succeeded in effectively setting seven of his own pen and ink drawings, and given that he is the featured solo percussionist in this recording, he is a triple threat. The music is full of the angular energy depicted in his art, clearly delineated by the lines, often driving and virtousic, with Hill as the solo percussionist, and is quite a tour de force.” — David DeBoor Canfield, Fanfare Magazine

“William Hill’s Ancient Rituals is a dynamic work inspired by Colorado’s Mesa Verde and the rites of its ancient cliff dwellers. It pushes the musical envelope in a host of ways, moody and languid passages that inspire vivid imagery, and robust percussion driven explosions. All of this makes a highly entertaining presentation-aurally and visually-with a less than stuffy vibe in the concert hall. Indeed the innovative material challenges the players as well as the audience: Many of the veteran, ultra talented musicians clearly found the music provocative, breaking into wide grins or hollering out a hearty Bravo” — John Sinkevics, GRNOW.com

“The Raven takes 40 minutes to perform and it is the most fleeting 40 minutes imaginable. What is so remarkably convincing – if not startling – is Hill’depth in emphasizing the everchanging thoughts of Poe in describing his loss. His skillful use of the chorus and the orchestra define and bring forth the emotion and range of expression of the text to a remarkable level. Hill’s score allows one to understand Poe’s poem and he received one of the longest standing ovations in recent memory.” — Robin McNeil, Opus Colorado

“The Raven is a remarkable setting of the poem, and a noble challenge for the chorus.” — Duain Wolfe, Chorus Director, Colorado Symphony and Chicago Symphony

“The Raven is a major and important work. It is the next step beyond Berg’s Lulu and Wozzeck”. — Zoe Erisman, Professor Emeritus University of Colorado