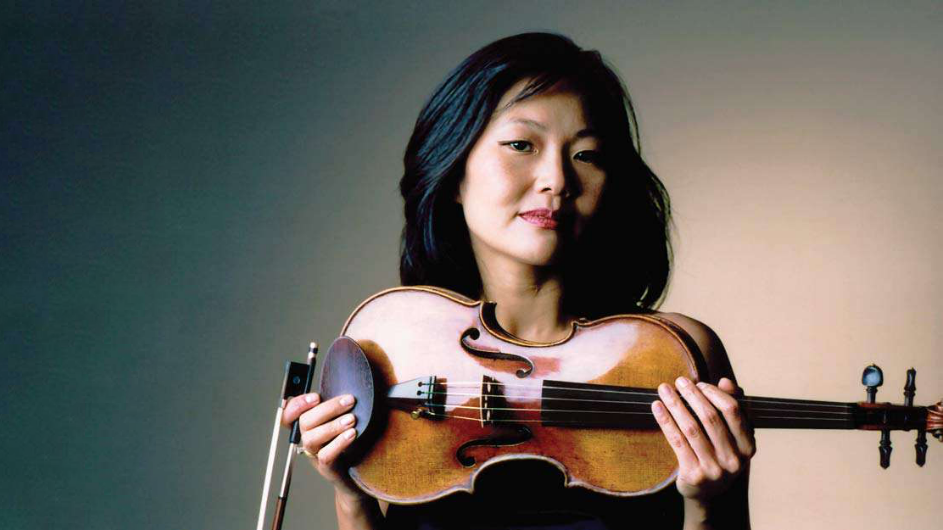 “By far the meatiest and most complex opus was by the highly inventive Englishman Thomas Adès via his 19-minute violin concerto entitled Concentric Paths… full of explosive and dissonant music-making… She (Hwang Williams) had the virtuosity to play through all the musical brambles, emerging unscathed”.

Yumi Hwang-Williams has been Concertmaster of the Colorado Symphony since 2000, celebrating her 20th season in 2019/20. An American violinist of exceptional musicianship, she is recognized both for her stylish performances of the classics and her commitment to the works of present-day composers.

Strings magazine calls her “a modern Prometheus” who has “emerged as a fiery champion of contemporary classical music.” Her interpretations of concertos by Thomas Adès, Aaron Jay Kernis, Michael Daugherty, and Christopher Rouse have earned critical acclaim as well as enthusiastic approval from the composers. She has collaborated with the Joffrey Ballet in a world premiere of Bold Moves, with numerous performances of Adès’ Concentric Paths for violin and orchestra choreographed by Ashley Page. Yumi recently celebrated the release of two albums of Isang Yun’s music with Matt Haimevitz with the Violin Concerto No. 1, Solo piece, and work with piano — a culmination of a decade-long project.

Meet Concertmaster Yumi Hwang‑Williams as she celebrates over 20 years with the Colorado Symphony.

Yumi has appeared as soloist with other major orchestras both in the U.S. and abroad, including the Cincinnati Symphony, Indianapolis Symphony, Sinfonieorchester Basel (Switzerland), and the Bruckner Orchester Linz (Austria) with conductors Marin Alsop, Dennis Russell Davies, Hans Graf, Brett Mitchell, Paavo Järvi, Peter Oundjian, and Markus Stenz. An avid chamber musician, she has collaborated with Jeffrey Kahane, Andrew Litton, Anne-Marie McDermott, Pinchas Zukerman, among others.

Prior to joining the Colorado Symphony, Yumi served as Principal Second Violin for the Cincinnati Symphony. In addition, she previously served as Concertmaster of the Cabrillo Festival Orchestra for 13 summers, has performed as Guest Concertmaster for the National Arts Centre Orchestra, Ottawa, at the invitation of Music Director Pinchas Zukerman, and has been Guest First Violinist with the Philadelphia Orchestra.

Yumi began violin studies at the age of 10 in Philadelphia, one year after emigrating from South Korea. She was accepted to the prestigious Curtis Institute of Music at age 15 and made her debut at the age of fifteen as a soloist with the Philadelphia Orchestra. Currently, she is Adjunct Violin Professor at the University of Denver, Lamont School of Music, and is actively involved in advancing the arts in her community through many local concerts and supporting the symphony. Yumi plays on a violin made by Carlo Landolfi c. 1752.