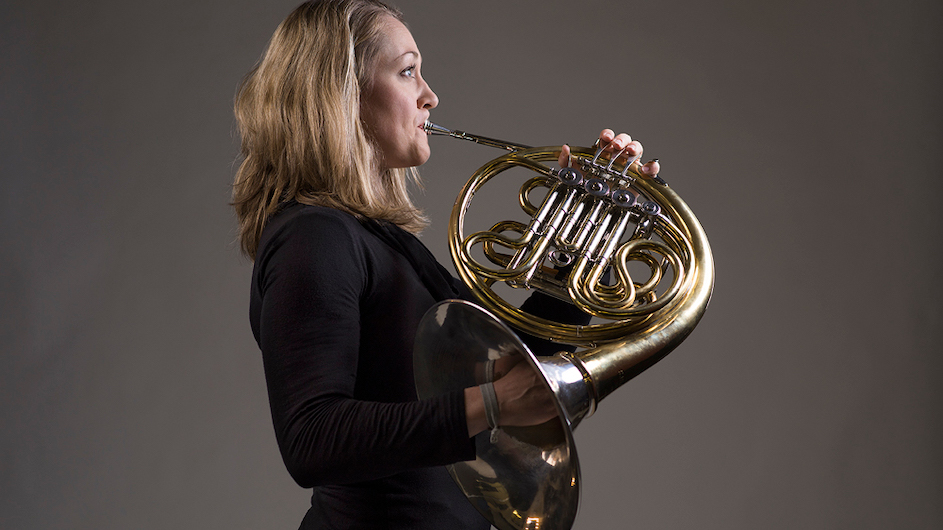 Carolyn Kunicki became a member of the Colorado Symphony horn section at twenty-one, through a national audition. She has a passion for educational outreach and plays and narrates stories throughout the Denver Public School system.

Carolyn Kunicki is a native of Pennsylvania. She showed an interested in music at an early age playing the family piano and her father’s old boy scout bugle which often led to her and the bugle being sent outside. At age nine she started studying the French horn mostly due to her mother telling her she thought it sounded pretty and a strong desire to play something loud. She was accepted to the Julliard School when she was 16.

Her Studies with Julie Landsman (retired principal horn of the Metropolitan Opera) led her to winning the Juilliard Strauss Horn Concerto competition, the Aspen Music Festival Fellowship Award, and the Aspen Wind Solo Competition as well as cultivating a love for the operatic repertoire. Carolyn spent many evenings attending the Metropolitan Opera during her schooling.

When Carolyn was twenty-one she earned a position in the Colorado Symphony horn section through a national audition. As she was currently in the second year of her fellowship at the Aspen Music Festival she was delighted to start a life in Colorado having fallen in love with the state. She left briefly to play Assistant Utility Horn in the Saint Louis Symphony but was eventually relieved to return to Colorado mostly due to the weather of the Mid-west.

Carolyn plays principal horn for the Central City Opera during the summer. She has a passion for educational outreach and plays and narrates stories throughout the Denver Public School system. When not playing horn she is often visiting the Denver Art Museum, Denver Zoo, and Denver Museum of Science with her two daughters who are two and four. She enjoys biking, hiking and crossfit.